What is a Representative Thermal Fluid Sample?

What is a Representative Thermal Fluid Sample? 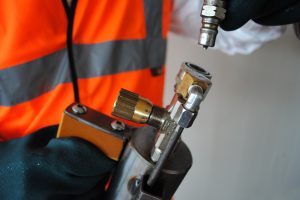 ‘A truly representative sample of the complete charge can be taken only when the fluid is hot and circulating.’

The document goes on to describe use of ‘the bomb’ – a closed sampling device designed to capture the volatile light ends that would otherwise be “boiled off” if the sample was taken when open to atmosphere.

Systems design varies widely from site to site: pipe diameter, fluid velocity and pipe layout must be taken into consideration. In addition, aged oil can be significantly more viscous, therefore;

It can only be representative when at temperature – if there was an event it would be from a system operating at normal temperature.