Why Collect a Thermal Fluid Sample in a Closed Manner?

Why Collect a Thermal Fluid Sample in a Closed Manner? 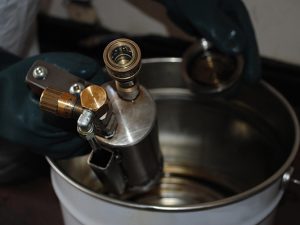 A closed sample device such as a ‘bomb’ must be used to ensure that the fluid does not pass through atmosphere. Light ends or volatiles consist of a homologous mix of hydrocarbons with different boiling/flash points.

Where an ‘open’ sample is collected, the most volatile (lowest flash point) species will automatically escape and flash off to atmosphere, instead of being allowed to cool and condense back into the sample where it can be decanted under lab conditions.

In this case, as the lowest flash point material has been vented off, incorrect (too high) flash point values will be seen