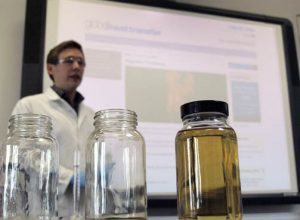 The key information required from test reports is carbon level, which indicates if a thermal fluid is breaking down due to thermal cracking and/or oxidation, total acid number (TAN), which is a measure of acidity, usually due to the oxidation process  and flash point which indicates how well a system vents-off light fractions which re generated by the thermal cracking process.

“Speaking to customers in the field about test reports has prompted Global Heat Transfer to use a red-amber-green (RAG) status indicator based on threshold limits being reached,” reveals Andy Burns, Technical Business Manager at Global Heat Transfer.

“For example, green would mean no action is needed and amber would mean action should be taken imminently to avoid problems, while red would mean a critical threshold has been reached, needing urgent action.

Fluid awareness training examines the consequences of excessive carbon build-up which can cause the system to clog up and fail. Carbon collects inside pipework and heaters and affects thermal efficiency, acting as an insulating layer and causing hot spots in heaters which can melt coils and cause fires. The emphasis is on diagnosis and planned preventative maintenance, potential problems arising from poorly maintained thermal fluids.

In terms of DSEAR training, all thermal fluids break down at some point and the rate of decomposition varies in report to the type of fluid and temperature  and  fluid durability in direct proportion to the proximity to its maximum recommended bulk operating temperature.

A fluid’s gradual degradation through thermal cracking will lower its flash point, fire point and corresponding auto ignition temperature and action is needed when this reaches 115 degrees centigrade (red warning for a mineral fluid) although a cautionary amber alert is triggered once a closed flash point reaches 130 Centigrade. A closed flash point value less than 80 Centigrade can be disastrous as in the event of a loss of containment, ignition is likely without an ignition source.

Understanding a thermal oil’s material safety data sheet (MSDS) is a key training objective because the document outlines all of the fluid’s characteristics, including operation temperature range, fluid density, fluid viscosity, flash points, auto-ignition, pour point and boiling point. Not all thermal fluids have a high starting flash point, which reiterates the importance of sampling on a scheduled basis, because a synthetic fluid for example will generally have a lower flash point  than a mineral fluid.

Get A Quote Request MSDS