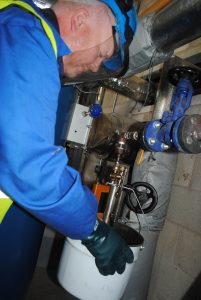 Sir, Whether its paracetamol for a headache or an occasional sachet of cold remedy, we all self medicate every now and then. But if you suspected you had high blood pressure and heart problems, would you still self-diagnose or would you go to an expert? A process plant is like a human body and each element of it has to be addressed holistically in order to ensure that it doesn’t fail, creating problems on the rest of the line.

The area of the plant that I see being self-medicated most regularly is thermal fluid in heat transfer applications. Manufacturers are unaware of the risks they take by ignoring thermal fluid degradation and by sampling oils incorrectly, without the input of specialists.

If oil samples are not collected while the fluid is hot and circulating, artificially high flash point values will be returned. As a result, an unsafe situation could be presented as a safe one. The plant manager would underestimate the health and safety risks and maintenance would not be conducted appropriately.

Based on this kind of incorrect diagnosis, the equivalent of life threatening cholesterol levels could be regarded as nothing more than a headache – and treated with drugs from the bathroom cabinet. Decreased energy efficiency, unmanageable flash points and increased risks of explosions are a few of the dangers resulting from erroneous sampling and testing.

Testing of thermal fluids should always be conducted using hot sampling techniques and samples should be submitted to an independent laboratory. Only by doing this can manufacturers ever have sufficient assurance that the state of their thermal fluids has been correctly diagnosed and can be accurately treated.